Help Dennis to deliver documents from Accounting to the boss, but watch out – strange things have been happening around the office lately and Dennis may need to quickly adapt to the changes that are taking place.

The overarching concept of Risky Business is to introduce players to a straightforward repetitive task, then to gradually introduce a variety of changes. Although not directly referenced, these changes are intended to emulate or at the very least parody problems that an office worker might encounter, such as being sick or ill, or under the effects of alcohol after a lunch function. Other events, such as reversed controls, gives a sense that sometimes taking a step back is needed to continue forward, and are intended to raise awareness around adapting to sudden and unexpected change. It also acts as a reminder that life is built upon change. The selected title Risky Business could be used not only for a business setting, but also as a general means of a person's business and/or day to day life.

Risky Business has been developed as an in-browser experience that can be played on any device that features a web browser and has internet access, such as a PC or Mac. It is not targeted at gaming consoles at this time, due to the nature of gameplay and the reliance of input devices such as mouse and keyboard. The game has also been specifically designed so that the in-game environment can be reskinned to cater for a specific industry, such as public and private schools, and marketed as an educational package. The game prototype currently features 11 levels, however additional levels and gameplay functionality can be added in order to expand the length of the game in the future with relative ease.

Although everyone faces change in their life, the primary target audience of Risky Business is specifically designed for anyone who is likely to encounter change at some point within their workplace or learning environment. This includes people aged 14 years and over who have recently entered the workforce, as well as those who are nearing retirement from the workforce (60+ years). The aim is to make players conscious of their own ability to adapt to change and how they deal with it. For this reason, Risky Business will potentially have the greatest impact on those who do not cope well with change, or those who find change in the workplace stressful. The intention is to increase players’ self-awareness and to help to identify their own ability to cope with change, and to ideally come up with their own strategies with how to cope with this change.

As similarities go, there are games in the world that are like this one. What we feel is unique, is the general change statements and life advice given throughout play. Quotes, both of a serious and satirical nature, are displayed within each level to highlight the nature of the change that has taken place, and in some cases to motivate the player to finding a solution to cope with this new change.

The main objective is to obtain documents and deliver them to the Boss (Manager). While the main task is being completed, players will have to adapt to one or more changes that take place and affect gameplay within each level.

Players advance through the levels by moving from floor to floor by traveling on elevators, climbing stairs and jumping over holes in the floor. Additionally, as each level is completed a change is made for the player to overcome (e.g. Reversed Controls, blurred vision).

The overarching premise is a business worker who must deliver files or documents to the Boss/Manager’s office (presented as a door) in the setting of a business building with elevators, stairs, holes in the floor, accompanied by narrative text.

The Narrative text components included are either humorous, advice about change, potential clues to certain levels and some banter to jest the player.

The primary visual art style is akin to an 8-bit side scroller/platformer.

In addition to this, the overarching theme could be changed or reskinned to suit a specific industry, such as public and private schools, without the need to make any changes to gameplay or the basic premise.

When looking over a game with a concept to change, breaking things down for the first-time viewer can be tricky. As such Risky Business has a simple yet deep grasp of the concept of adapting to change, which can be broken down by exploring the dramatic and formal elements within the game. Components of Risky Business include the Fullerton (2014) formal elements such as Players, Number of Players, and Objective. Players in this version of the game take the role of a corporate business worker, whose job or objective is to deliver documents to the boss or Manager’s office. The number of players for this game currently stand at one, making the type of game according to Fullerton (2014) a player vs game; also considered player vs NPC (Non-Player Character). This is the single player means of gameplay where the player completes objectives within the game environment on their own. However, it is possible of including multiple players in what is known as local co-op or ‘couch co-op' to mix things up and have players work together to accomplish business tasks. This then would result in the game becoming “multiple individual Players vs Game” Fullerton (2014). Currently, no major jumps such as multiplayer will be considered at this time.

In terms of dramatic elements, the premise is a business worker, file documents, and Boss/Manager’s office (presented as a door) within the setting of a business building with elevators, stairs, holes in the floor, and narrative text. The challenge in Risky Business does not end at delivering documents to the boss and jumping over holes. The challenge initially begins this way, but is eventually infused with the serious purpose of change and adapting to that change. The challenge then changes so that the player must learn to adapt to and learn from these changes as they progress throughout the game. These include reversed controls, blurred vision, altered gravity, mouse point-and-click control, bouncy world, triggered reveal and relocated key, plus more. One of the interesting topics noted by Fullerton (2014), is “Experience becomes an end in itself”.  In Risky Business, as players work through the challenges they may not consider the experience to be an interesting one. Players may stop and read the narrative as they traverse each level, and even then, may just see the game as an annoying thing and a waste of time. It would then be the end which provides the meaningful experience with some after processing, and a notation of the serious purpose.

In terms of taxonomies, Risky Business will appeal particularly to Bartle’s Achiever and Explorer player types (Bartle 1996). The changes that take place and alter or push the physical boundaries within each level, combined with the mental challenge that these new changes introduce to the player, will appeal to Explorer player types; as they progress through the game they will become curious about what exactly has changed as they commence play within a new level. But Achievers will particularly be in their element, as the levels vary with each change that takes place and a new challenge is introduced, yet the incentive and pathway to success remains clear.

What can be said for certain, is that the Prensky Model was followed during the game's construction. However as Risky Business is not for profit the funding and selling components of the Prensky Model have been cut out. The concept began with the serious purpose around coping with change, followed by the reflection of possibilities of how this could be successfully executed. The starting components of consideration was theme (business industry) and model design type (2D or 3D). Using Construct 2 (Free Edition), a basic stock 2D platformer template was used for building and testing this idea around change. Customisation within this template began with setting the basic controls to complete the level, followed by the first change that would take place during the second level. Finally, the upgrade component of the Prensky Model was completed by implementing even more changes, such as our own level map and the use of an animated model to fit the theme of an office building. Once this method was repeated a pre-alpha version of the game prototype was complete. This pre-alpha version included a map, initial narrative, character, serious purpose for GBL, and game goal (Overarching goal).

Risky Business is intended to be used as a self-awareness tool both within and outside of the workplace or learning environment. It can be played individually either in the player’s spare time, or as a group activity where a discussion or debrief can take place afterwards. As players develop an understanding of the core concept of the game, they must begin to engage lateral thinking techniques or a higher order of thinking to adapt to the changes that take place within each level; and if they fail to do so they cannot progress through the game.

In situations where Risky Business is played in a group setting, this can be used to incorporate Gardner’s theory of multiple intelligences (Gardner 2008) to cater for the varied range of strengths and intelligences. Some participants may prefer to observe others playing rather than play themselves; participants may choose to do this as they may not be comfortable with or identify as a gamer, or they may possess an impairment or inability to manipulate the controls. In doing so they allow themselves to analyse the game more freely and comfortably, and additionally allows them to potentially make observations regarding the changes that are taking place that might not be immediately obvious to the player. Conversely players who are comfortable playing games still feel challenged by the constant change to the controls, environment, and various other in-game aspects.

Challenge is the primary dramatic element in Risky Business (Fullerton 2014). As players are introduced to a game’s basic premise they are able to quickly develop a state of flow as they become familiar with the in-game environment, however the level of difficulty increases as the altered aspect/s become more and more unexpected and complex. This correlation between the concept of flow and challenge aligns with Benjamin Bloom’s taxonomy educational theory, or more simply known as ‘Bloom’s Taxonomy’ (Fullerton 2014). As the challenge increases players must start to engage higher order thinking skills in order to successfully solve the new problem that they have been presented with.

An example of this can be found after the player completes the first challenge. When the controls are reversed at the commencement of the second challenge players will immediately know that something has changed, though they may not initially be able to identify in what way the change has affected gameplay. By making use of lower order thinking skills to first pinpoint exactly what the change has affected, they can then begin to make use of higher order thinking skills, such as applying their theory to confirm the change and the new way to move the player avatar using the new controls. Players might do this through trial and error, or by exploring other keys on the keyboard. Once they are able to identify what they believe to be the new player controls, they can then confirm their theory by attempting to complete the challenge. Once the player has completed several challenges they may begin to analyse the changes, notice patterns, and theorise the motives around the overarching concept of the game. 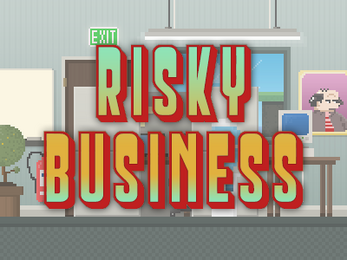